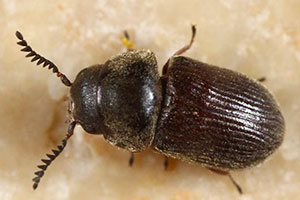 Anobiid powderpost beetles are usually about 1/16 to 1/4 inch long and reddish brown or grayish brown to dark brown. The body is cylindrical, elongated, and covered with fine hair. The head is covered by the pronotum from top view. The last three segments of antennae are usually lengthened and broadened. The larvae are white, C-shaped grubs with rows of small spines on the dorsal side. The beetles’ life cycle lasts one to 10 years, depending on the species. Anobiid powderpost beetles infest seasoned softwood and the sapwood of seasoned hardwoods. Most commonly, infestations of Anobiid powderpost beetles are found in structural timbers made of softwood, such as beams, sills, joists, studs, sub-flooring, and plywood. In addition, Anobiids will infest hardwood furniture, wall paneling, window and door molding, hardwood floors, and furniture. Woods such as maple, beech, poplar, and pine are especially susceptible to attack. The beetles prefer to infest wood with high moisture content in poorly ventilated areas in crawl spaces of houses, utility rooms, and garages. Under favorable conditions, the infestation then spreads into walls and other areas of the structure.

Infestations develop slowly, but wood can be reinfested year after year. The key to avoiding serious problems with Anobiid Powderpost beetles is early detection and control. Usually, homeowners see the damage rather than the beetles. The larval damage occurs entirely below the surface of the wood, where larvae eat tunnels. This damage is not usually seen until the wood disintegrates. However, the adults emerge from the wood, leaving emergence holes and powderlike frass that sifts from the holes. Emergence holes from Anobiids are 1/16 to 1/8 inch in diameter and round. Cigar-shaped frass is found loosely in tunnels and in small mounds outside of emergence holes. The frass is powderlike but feels gritty to the touch.