HOW TO IDENTIFY ARGENTINE ANTS? 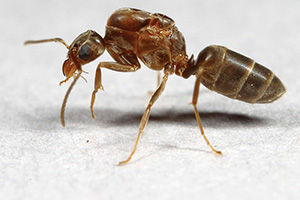 The Argentine is small-about 1/8th inch and is a brownish color. Foraging columns of the ants are seen heading out from the colony to seek food and water sources. They widely infest urban areas, with multiple colonies in a relatively small area and each colony can contain thousands of workers. They are the most persistent and troublesome ant that will invade a home. They are small and can get in through tiny cracks. They tend and defend aphids and scale, seeking the honeydew, so they foster plant damage by those insects. Argentine Ants live in shallow galleries in the ground-often only a few inches deep. A single colony will have multiple queens, and can grow quite rapidly, displacing other native types of ants. They also rapidly establish other colonies when a queen leaves and takes some of the workers with her. These satellite colonies may eventually return or they may become the mother colony to many new colonies. During the hot summer months, some may even be temporarily established inside homes-under carpets, attic insulation, or in walls and potted plants.