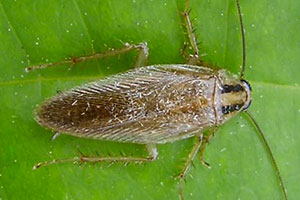 This species is native to certain areas in Southeast Asia and appears to have been introduced to the United States through the port of Tampa, Florida. Its distribution as a common pest has slowly expanded throughout most of the state of Florida. It is very similar in appearance to the German cockroach, but it has very different behavior. It typically becomes most active just at dusk, remaining so for a few hours thereafter. Adults will fly quite readily and for relatively long distances. They will fly to lights at night.