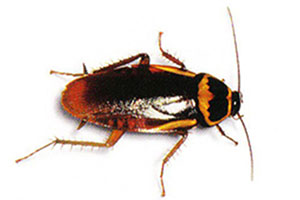 The Australian cockroach is similar in appearance to the American Cockroach but is rarely more than 1 1/4 inches long. It is reddish brown and can be distinguished by prominent yellow stripes along the outer front edge of either wing, and by a prominent dark spot in the center of the pronotum. Well developed wings in both sexes extend to the tip of the abdomen. This cockroach is found chiefly in the southern United States, but it has been found in green houses, zoo buildings and houses in the northern states.