Bed bugs are parasitic insects of the cimicid family that feed exclusively on blood. Bed bugs are mainly active at night, but are not exclusively nocturnal. They usually feed on their hosts without being noticed.

A number of adverse health effects may result from bed bug bites, including skin rashes, psychological effects, and allergic symptoms. Diagnosis involves both finding bed bugs and the occurrence of compatible symptoms.

Bed bugs have been known as human parasites for thousands of years. At a point in the early 1940s, they were mostly eradicated in the developed world, but have increased in prevalence since 1995. Because infestation of human habitats has been on the increase, bed bug bites and related conditions have been on the rise as well. 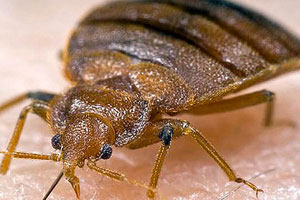 Adult bed bugs are light brown to reddish-brown, flattened, oval-shaped and have no hind wings. The front wings are vestigial and reduced to pad-like structures. Bed bugs have segmented abdomens with microscopic hairs that give them a banded appearance. Adults grow to 4–5 mm in length and 1.5–3 mm wide.

Newly hatched nymphs are translucent, lighter in color and become browner as they moult and reach maturity. A bed bug of any age that has just consumed a blood meal will appear to have a bright red translucent abdomen; this color will fade to brown over the next several hours and within two days will become opaque and black as the insect digests its meal. Bed bugs may be mistaken for other insects, such as booklice, small cockroaches, or carpet beetles, however when warm and active, their movements are more ant-like, and like most other true bugs, they emit a characteristic disagreeable odor when crushed.

The life span of bed bugs varies by species and is also dependent on feeding.

Feeding habits of the Bed Bug

Most species feed on humans only when other prey are unavailable. They obtain all the additional moisture they need from water vapor in the surrounding air. Bed bugs are attracted to their hosts primarily by carbon dioxide, secondarily by warmth, and also by certain chemicals. 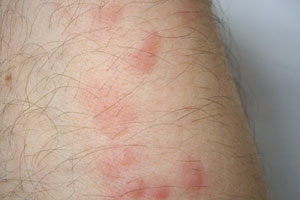 Their bites are not usually noticed at the time. They develop slowly to low itchy welts that may take weeks to go away. They prefer exposed skin, preferably the face, neck and arms of a sleeping individual. The neck and jaw line are particularly favored places to feed.

Although under certain cool conditions adult bed bugs can live for as long as a year without feeding, under typically warm conditions they will try to feed at five to ten day intervals and adults can survive for about five months without food. Younger instars cannot survive nearly as long, though even the vulnerable newly hatched first instars can survive for weeks without taking a blood meal.

A bed bug pierces the skin of its host with what is called a stylet fascicle, rostrum, or “beak”. This is a unit composed of the maxillae and mandibles, which have been modified into elongated shapes from a basic, ancestral style. The right and left maxillary stylets are connected at their midline and a section at the centerline forms a large food canal and a smaller salivary canal. The entire maxillary and mandibular bundle penetrates the skin.

Life stages of the Bed Bug

Bed bugs have six life stages (five immature nymph stages and a final sexually mature adult stage). They will shed their skins through ecdysis at each stage, discarding their outer shells which are clear, empty exoskeletons of the bugs themselves. Bed bugs must molt six times before becoming fertile adults and must take a blood meal in order to complete each molt.

Each of the immature stages lasts approximately a week, depending on temperature and the availability of food, and the complete life cycle can be completed in as little as two months (which is actually rather long compared to other ectoparasites— fleas, for example, can complete a cycle in as little as three weeks). Fertilized females with enough food will lay three to four eggs each day continually until the end of their life spans (about nine months under warm conditions), possibly generating as many as 500 eggs in this time

Bed bugs can cause a number of health effects, including skin rashes, psychological effects, and allergic symptoms. They are able to be infected by at least 28 human pathogens, but no study has clearly found the insect is able to transmit the pathogen to a human being. Bed bug bites or cimicosis may lead to a range of skin manifestations from no visible effects to prominent blisters.

Dwellings can become infested with bed bugs in a variety of ways, such as:

Bed bugs are elusive and usually nocturnal (peak activity usually occurs around 5:00 or 6:00 a.m.), which can make noticing them difficult. They often lodge in dark crevices, and the tiny adhesive eggs can be nestled by the hundreds in fabric seams. Aside from bite symptoms, signs include fecal spots (small dark sand-like droppings that occur in patches around and especially beneath nests), blood smears on sheets (fecal spots that are re-wetted will smear like fresh blood), and the presence of their empty molted exoskeletons. 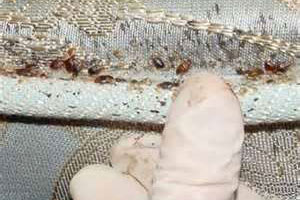 Although bed bugs can be found singly, they tend to congregate once established. Although they are strictly parasitic, they spend only a tiny fraction of their life cycles physically attached to their hosts. Once feeding is complete, a bed bug will relocate to a place close to a known host, commonly in or near beds or couches in clusters of adults, juveniles, and eggs which entomologists call harborage areas or simply harborages to which the insect will return after future feedings by following chemical trails. These places can vary greatly in format, including luggage, inside of vehicles, within furniture, amongst bedside clutter, even inside electrical sockets and nearby laptop computers. Bed bugs may also nest near animals that have nested within a dwelling, such as bats, birds,or rodents.

Eradication of bed bugs frequently requires a combination of pesticide and nonpesticide approaches. Pesticides that have historically been found to be effective include: pyrethroids, dichlorvos and malathion.

The carbamate insecticide propoxur is highly toxic to bed bugs, but in the United States the Environmental Protection Agency (EPA) has been reluctant to approve such an indoor use because of its potential toxicity to children after chronic exposure.[

Although occasionally applied as a safe indoor pesticide treatment for other insects, boric acid is ineffectual against bed bugs because bed bugs do not groom. The fungus Beauveria bassiana is being researched for its ability to control bed bugs.

The fall in bed bug populations after the 1930s in the developed world is believed to be partly due to the use of DDT to kill cockroaches. The invention of the vacuum cleaner and simplification of furniture design may have also played a role. Others believe it might simply be the cyclical nature of the organism.

The exact causes of this resurgence remain unclear; it is variously ascribed to greater foreign travel, more frequent exchange of second-hand furnishings among homes, a greater focus on control of other pests, resulting in neglect of bed bug countermeasures, and increasing resistance to pesticides.

History of the Bed Bug

“Good night, sleep tight, don’t let the bed bugs bite,” is a common phrase for parents to say to young children before they go to sleep.

The Bed Bug in the 20th century

Prior to the mid-20th century, bed bugs were very common. According to a report by the UK Ministry of Health, in 1933, all the houses in many areas had some degree of bed bug infestation. The increase in bed bug populations in the early 20th century has been blamed on the advent of electric heating, which allowed bed bugs to thrive year-round instead of only in warm weather.

Bed bugs were a serious problem at U.S. military bases during World War II. Initially, the problem was solved by fumigation, using Zyklon Discoids that released hydrogen cyanide gas, a rather dangerous procedure. Later, DDT was used to good effect as a safe alternative.

The decline of bed bug populations in the 20th century is often credited to potent pesticides that had not previously been widely available. Other contributing factors that are less frequently mentioned in news reports are increased public awareness and slum clearance programs that combined pesticide use with steam disinfection, relocation of slum dwellers to new housing, and in some cases also follow-up inspections for several months after relocated tenants moved into their new housing.

Resurgence of the Bed Bug

Bed bug infestations have resurged in recent years for reasons which are not clear, but contributing factors may be complacency, increased resistance, bans on pesticides and increased international travel.[72] The U.S. National Pest Management Association reported a 71% increase in bed bug calls between 2000 and 2005.[73] The number of reported incidents in New York City alone rose from 500 in 2004 to 10,000 in 2009.[74]

One recent theory about bed bug reappearance is that they never truly disappeared from the United States, but may have been forced to alternative hosts. Consistent with this is the finding the bed bug DNA shows no evidence of an evolutionary bottleneck. Furthermore, investigators have found high populations of bed bugs at poultry facilities in Arkansas. Poultry workers at these facilities may be spreading bed bugs, unknowingly carrying them to their places of residence and elsewhere after leaving work.