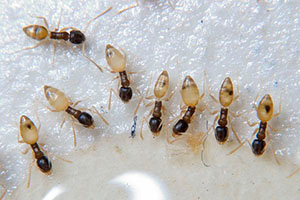 The Ghost Ant has become widespread throughout Florida, and is considered a major household pest. It is a tropical species, one that is considered a “tramp ant”. In cooler locations it will only nest in structures and greenhouses, but in warm locations it can nest anywhere it finds a favorable location-either indoors or outdoors. Their favorite food is honeydew, and they tend aphids that produce it. They will also eat dead and live insects. Indoors they are usually found in kitchens and bathrooms, going after sweets and moisture.