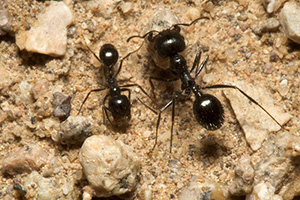 The Harvester Ant is quite large (1/4th inch) and red colored. It is also known for its ability to sting. Nests are found underground with a small mound at the opening, which is littered with leftover food debris. No live vegetation is found anywhere around the opening of the nest. They generally seek seeds as a main source of food. During the winter, they seal their nest. Swarming occurs several times each year, starting in June and July but most prominently during August and September. The winged ants emerge in large numbers, but most will not survive. The male dies right after mating, and the female starts a new underground colony. Colonies may last for quite a number of years, and can contain thousands of ants. The colony becomes less active in temperatures over 120 degrees and during the rainy season.