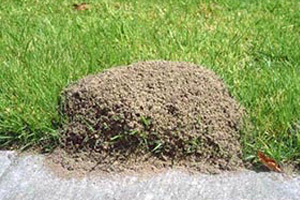 Fire Ants have caused destruction throughout the Southeastern portion of the United States. The red imported fire ant is reddish brown and 1/4th inch long. Fire ants build large mounds in open, sunny areas and can forage indoors. Workers can sting, commonly causing a white pusticle to form. The ant has two nodes on the pedicel. Workers are polymorphic (many forms), and colonies are usually monogyne (single queen) but sometimes polygyne (many queens). It is a very aggressive ant, and they may destroy other species of ant colonies in the area. Fire Ants can cause a severe sting, even being fatal when large numbers of the ants attack. They get their name from the severe reaction caused by their stings-it feels like fire! Some people are quite allergic to the stings. They can be colored from reddish to almost black. They live inside large mounds in fields and open space areas. Fire ants will eat insects, seeds, fruits, meats, vegetables, flowers, and honeydew-just about anything organic can become their food. The colony has a prominent queen (s) who mates and lays eggs. She will attend the eggs and larvae of the first generation, and then the first generation females will take over the care of later eggs, larvae, and even the queen. Worker females build the nest, excavating large amounts of dirt which forms the mound. Occasionally a nest will be built in a rotting log or under a rock. Imported Fire Ants can do major damage to new crops, and also are quite capable of inflicting painful stings and bites. They are very hostile to other ants. They are mostly reddish in color, although there is a minor variety that is black. This is the type that builds large earthen mounds, growing to 20-30 colonies per acre. The mound is usually about a foot high, but some have been reported which have reached eight feet in height. A mound will contain between 30,000 and 100,000 workers. It is very aggressive and likes to sting both humans and animals-over 1 million people are stung each year by Red Imported Fire Ants in the Southeastern United States. The Red Imported Fire Ant will feed on plants, including tree bark, and can be very destructive. They will also feed on other insects, eggs and young birds in ground nests.