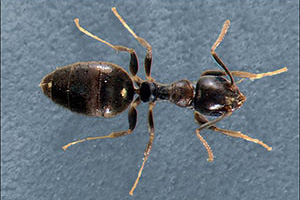 When first collected and identified in the Homestead, Florida area in 1986, the white footed ant was considered only of minor importance for the pest control industry. This tiny ant has now become quite a nuisance in at least 8 Florida counties, 3 of which are waiting for official confirmation. Originating in certain areas of Japan (Okinawa, Iriomote, southern Kyushu and Nansei Islands,) they were first accidentally imported into Florida. White-footed ants do not bite or sting, nor have they been reported to cause any type of structural damage. They are, however, attracted to sweet foods. Thus, it is common to find them foraging indoors and outside on hedges infested with honey-dew producing insects such as aphids and scales.  Estimations vary, but most agree that the average number of ants in a white-footed ant colony will range from 400,000 to well over 1 million ants. The sheer size of these colonies puts food at a premium; these pests must forage over a wide range and feed on several food sources. Colonies tend to be “spread out” as interconnected satellite colonies.