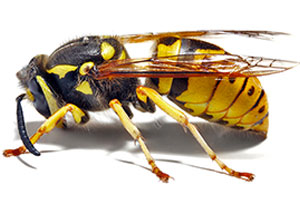 Often mistaken for honeybees, yellow jackets are a bit smaller in size, and are also brighter yellow as to the more orange color of honeybees. Yellow jackets may have a rapid side to side flight pattern prior to landing. They are scavengers eating meats and sweets and often found in parks or disrupting parties, picnics or other park events. Yellow jackets are sometimes called meat wasps, meat bees, or hornets. They have a stinger without barbs and can sting repeatedly without dying. Yellow jacket stings most often cause a swelling reaction followed by itching for a couple days. They are very aggressive defenders and are generally found nesting in holes in the ground; though occasionally nest in wall voids and attics. Seasonally, yellow jacket colony’s reach a size of 4,000 and 5,000 workers and a nest of 10,000 and 15,000 cells in August and early September. Like all wasps, yellow jackets abandoned their nest by late autumn. It’s generally considered unwise to try to remove a yellow jackets nest yourself.

Occasionally yellow jackets can end up in the house in large numbers. This is usually preceded by a slow growing wet spot on the ceiling, caused from liquid dripping from the established nest onto the drywall day after day. Every so often, a curious homeowner will poke or push their finger right through the deteriorated ceiling and end up with an unfortunate surprise.

Yellow jackets attached to the house will not survive through winter. However, the queens abandon the nest and will hibernate until early spring, with 95% of them hibernating in attics. If you have yellow jackets in your attic, one thing you can do to discourage them returning next year is to put up some chemical cards labeled for yellow jackets like “hot shot,” perhaps one to every 3 studs / bays. Yellow jacks tend to choose either the eave or the foundation of the house, and occasionally where the chimney and the wall meet.