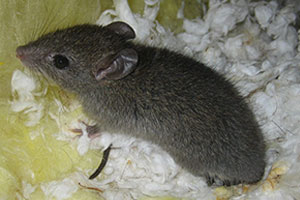 The House mouse is a small, slender rodent with a slightly pointed nose; small, black, somewhat protruding eyes; large, sparsely haired ears; and a nearly hairless tail with scale rings. House mice are considered among the most troublesome and economically damaging rodents in the United States. Adult house mice weigh from 1/2 to 1 ounce. They are generally grayish-brown with a gray or buff belly. House mice live in and around homes, farms, commercial establishments, and in open fields and agricultural lands. House mice will eat many types of food but prefer seeds and grain. Foods high in fat, protein, or sugar are preferred even when grain and seed are present. Such items include bacon, chocolate candies, butter, and nutmeats. Unlike Norway and roof rats, house mice can survive with little or no water, obtaining their water from moisture in the food they eat. House mice are mainly nocturnal, although in some areas a lot of daytime activity may be seen. Seeing mice during the day does not necessarily mean that a high population is present, although this is usually true for rats. They nest in the ground or in any protected location. Nests are constructed of shredded fibrous materials such as paper, burlap, or other similar items. They generally have the appearance of a "ball" of material loosely woven together. Nests are usually 4 to 6 inches in diameter. 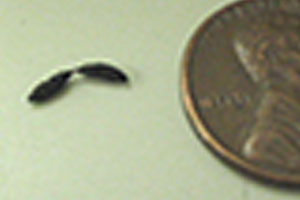 Studies indicate that during its daily activities, a mouse normally travels an area averaging between 10 to 30 feet in diameter. Mice will seldom travel farther than this to obtain food or water. Because of their limited movement and feeding behavior they are much more difficult to control in some situations.

House mice also cause damage to buildings by gnawing and nest-building activities, in addition to their contamination of foods. Mice often make homes in large electrical appliances, and they may chew up wiring as well as insulation, resulting in short circuits. This creates fire hazards or expensive damage. Mice also damage stored items in attics, basements, garages, or museums.

Among the diseases mice or their parasites may transmit to humans are salmonellosis (food poisoning), rickett-sialpox, and lymphocytic choriomeningitis. Mice may also carry leptospirosis, ratbite fever, tapeworms, and organisms that may cause ringworm (a fungal skin disease) in humans.

Life cycle of the House Mouse

Litters of 5 or 6 young are born 19 to 21 days after mating. Mice are born hairless and with their eyes closed. They grow rapidly, and after 2 weeks their eyes and ears open and they are covered with hair. They begin to make short excursions from the nest and eat solid food at 3 weeks. Weaning soon follows, and mice are sexually mature at 6 to 10 weeks of age. Mice may breed year-round. The female has 5 to 10 litters per year. Mouse populations therefore grow very rapidly under ideal conditions. 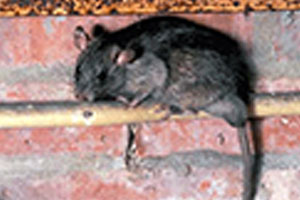 Roof Rats are probably the most common rat species found. This rodent was unknown in Arizona until 2002, when they started to show up in the eastern part of Phoenix, probably unintentionally imported from another state. By 2004, they were well-established throughout neighboring towns and cities. They are also known as Alexandrian rats, black rats, fruit rats and ship rats. They explore their usual territory daily, covering about 100 to 300 feet. Rats will frequent the same areas and travel the same runways daily. Because they are nocturnal by habit, most of their activity is at night. The body is slender, from 6 1/2 to 8 inches long. They have an average weight of 6 to 12 ounces. Their color varies from black to brownish-gray, with the underside being gray to white. The tail is hairless and longer than the head and body, from 7 1/2 to 10 inches long. Roof rats will not only nest in trees (especially palms), ivy, and ground cover, but also in upper portions of buildings. They are omnivores--their food source consists of snails, fruits, grains, vegetables, nuts and seeds, pet food and items from unsealed garbage containers, and just about anything leftover from humans. Rat’s visit fewer food sites than mice, but will eat more at each site. They usually consume 1/2 to 1 ounce of food daily and drink up to 1 ounce of water daily. A water source is also essential.

The roof rat is distinguished by its larger ears, pointed nose, a tail that is longer than the body, and an average body weight of 6-12 ounces. Roof rats also have an acute sense of smell. Best suited for tropical and semitropical zones, roof rats are found along the Pacific Coast, in Hawaii, along the lower half of the East Coast, throughout the Gulf States and major river systems (i.e., Mississippi River). Rats spread disease, damage structures, and contaminate food, animal feed, and the environment around them. Because a single pair of rats shed more than one million body hairs each year, and a single rat will produce 25,000 droppings per year, contamination is a serious problem. Additionally, the physical damage to structures which includes electrical, plumbing, and woodwork problems can be extensive and costly. The roof rat is an extremely detrimental rodent.

Life cycle of the Roof Rat

The female roof rat reaches sexual maturity at 3 months of age. They are in heat approximately every 4-5 days. The gestation period for this rodent is 21 to 23 days, with each litter being 5-8 pups. After giving birth the female is capable of being in heat again in 24 to 48 hours, so many generations can be produced each year. 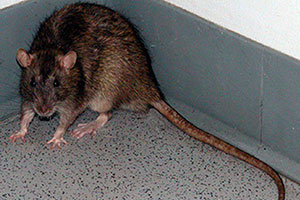 The Norway rat is also known as the brown rat, gray rat, common rat, house rat, wharf rat, sewer rat, barn rat and water rat. They are not actually from Norway, but were first identified there. Norway rats are the most likely type to get into buildings, and are a much bigger problem to eliminate once they do. Norway rats are often completely black. They can also be grayish-brown, but the color may vary from a pure gray to a blackish- or reddish-brown. The underside is usually gray to yellow-white. The body is heavy and thick, from 7 to 10 inches long. They weight between 12 to 24 ounces. The tail is shorter than the head and body--about 6 to 8 1/2 inches long. The tail is dark on top with a lighter underside. Norway rats are able to gnaw through wood, lead, aluminum, copper, even cinder block and uncured concrete. They burrow extensively in soil and are excellent swimmers and good climbers. They usually nest in the basements and lower portions of buildings. Norway rats are very nocturnal--most of their activity and feeding takes place between a half-hour after sunset and a half-hour before sunrise. They also have a very strong social hierarchy - the biggest and strongest.

Norway rats get the best food. They are omnivores-they can eat just about anything, but they prefer meats, fish, flour, cereal grains, fruits and vegetables. Norway rats will eat almost any human food and waste-garbage and even grease can provide excellent diets. They consume 3/4 to 1 ounce of food each day and require water daily to survive. Norway rats are best suited for temperate zones. Due to their excellent adaptability, they are found everywhere in the United States, first arriving here on ships in the 1770's.

Life cycle of the Norway Rat

Norway rats become sexually mature in 3-5 months of age. The females create a nest in secluded places when inside a building, or in burrows or tunnels when outside. There can be from four to seven litters each year, with up to a dozen young in each litter, so the population grows quite rapidly. Adults only live from 9-12 months.

For local pest control in Fort Lauderdale, Pompano Beach, West Palm Beach, and all of greater South Florida. Call (954) 943-0008 or complete the form to schedule a FREE inspection.