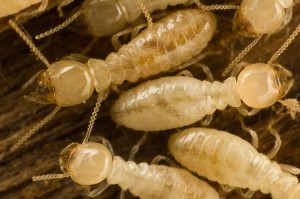 One of the most difficult parts of termite control is termite identification. Among the most common in South Florida is the Drywood Termite.

Drywood Termites, Cryptotermes Cavifrons, are typically a pale brown color. Soldiers measure approximately 3/8-inch long and have large brownish heads with strong jaws. Kings and Queens measure up to ½-inch long. During the Alate (winged) stage they are as long as 5/8-inch. With Drywood Termites, the “worker” caste is made up of Nymphs (juveniles). These Nymphs, which comprise the majority of the colony, are wingless and cream-colored. Unlike their subterranean cousins, Drywood termites live exclusively in wood and do not require any contact with soil. These termites acquire their necessary moisture through the digestion of cellulose, found in most common household materials. Unfortunately, this means they are immune to do-it-yourself soil treatments. Drywood Termites have a tendency to create multiple colonies inside structures. Although often confused with sawdust, the most frequent way to identify an infestation is with the discovery of fecal pellets. Swarming and infestations by Drywood termites are usually activated by warm temperatures and heavy rain during the Spring and Summer months. Soldier and Nymph termites remain inside the colony at all times. The Soldier termite guards the colony against attacks from enemies such as ants. Nymph (juvenile) termites aid in all of the functions of the colony, from feeding soldier termites and assisting the King and Queen with new young, to constructing and expanding the colony. Alate (winged) termites “swarm” to find new dry wood to infest. Once successful, these Alates soon pair, enter a small hole and create a new colony. 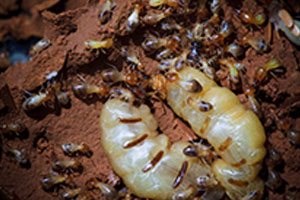 Termite identification often results in finding Subterranean Terminte in South Florida. Subterranean Termites, Reticulitermes Flavipes, are usually a transparent, yellowish color. Workers have pale-colored bodies and can get up to 3/8-inch in length. Soldiers are light-colored with dark brown heads and strong jaws. They can grow up to 3/8-inch long. Kings and Queens vary from light to dark color and can grow up to an inch in length. The alate (winged) have two sets of long wings and can get as long as ¾-inch. Subterranean Termites are the most commonly encountered termites in Florida. They build large colonies with intricate tunnel systems and have as many as a million members. Although Florida subterranean termites are more likely to swarm during the Spring months, small swarms occur year round. They are most attracted to warmer climates. Their colonies are typically found in soil as they require constant contact with a moisture source. They build mud “tubes” to reach food sources above ground. Floridian subterranean termites can build tubes up to 60 feet in length. They fill the holes they create with soil, in order to maintain a high level of moisture throughout the colony. They can even find cracks in concrete and brick in order to reach a food source! Note that when people engage in searching for termite identification themselves, it is very difficult. This is because Floridian Subterranean termites do not expel fecal matter. They leave the exterior of wood structures they are destroying intact. Therefore, detecting an infestation is a serious challenge! It is important to look for termite tubes around the perimeter of your home. In a well-established colony they can have both primary and secondary reproductives allowing the colony membership to grow very rapidly.

Contact Command Pest Control for more questions about our services. Call us at (954) 943-0008, or simply fill out our contact form and we will get back to you as soon as possible. 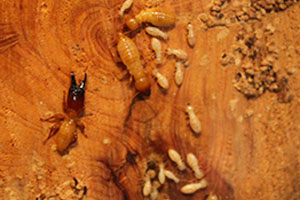 Dampwood Termite, Cryptotermes Castaneus, varies with life-stages. Soldiers are typically a very light cream color with large dark heads and powerful jaws, growing up to ¾-inch long. The most common specimen, Nymphs (juvenile termites), are pale with soft bodies and can get up to 5/8-inch in length. During the Alate, or winged phase, these termites can grow up to 1 inch. While the least common, Kings and Queens are typically brownish in color, and can grow as long as 5/8-inch. Dampwood Termites do not live in soil, but rather prefer damp or rotting wood to establish their colonies. Unlike Florida Subterranean termites there is no true “working” caste, so the Nymphs (juveniles) carry out all colony tasks, including tending to the king and queen, feeding soldiers and expanding the colony. Once a colony matures, it releases Alate (winged) termites with well-developed eyes to swarm, mate, and create a new colony. Oftentimes it is hard to identify when Dampwood Termites have colonized, as the fecal pellets they produce usually become wet and stick to the walls of the colony. This specimen specifically targets decaying ground wood. It is vital for Florida homeowners to control moisture-prone areas of their home, as the state’s climate provides an ideal environment for infestation. Dampwood Termites are capable of living, feeding, and eventually weakening trees surrounding the home, dramatically increasing the risk for serious external property damage.

Remember, if you need help with termite identification, call the experts at Command Pest Control! 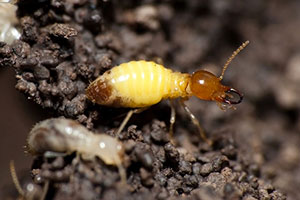 Formosan Termites are also referred to as “Super Termites” because of their reputation for being the most destructive termite on the planet. It's important to call an expert for termite identification for this reason! They have the largest colonies of any termite, some reaching as large as 300 feet and boasting more than 8 million members. These large nests can have multiple kings and queens constantly reproducing, with a mature queen laying as many as 1,000 eggs a day! The size of these colonies can cause substantial damage at a rapid rate. With the ability to consume entire planks of wood while leaving the surface intact, these pests can be practically impossible to detect. These termites are also unique in that they can create secondary nests with no ground connection to the original. This makes controlling them, even after having found a nest, extremely difficult. Secondary nests have been found inside walls, behind furniture, and underneath cabinetry.

Contact Command Pest Control for more questions about our services. Call us at (954) 943-0008, or simply fill out our contact form and we will get back to you as soon as possible.

LET US CALL YOU